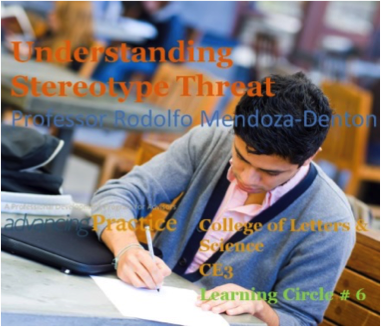 “The problem is that the pressure to disprove a stereotype changes what you are about in a situation. It gives you an additional task. In addition to learning new skills, knowledge, and ways of thinking in a schooling situation, or in addition to trying to perform well in a workplace, you are also trying to slay a ghost in the room, the negative stereotype and its allegation about you and your group. You are multitasking, and because the stakes involved are high—survival and success versus failure in an area that is important to you –this multitasking is stressful and distracting.”

Do you know the answers to these questions? If not, do you know where to find them?

What is stereotype threat?

Who is vulnerable to stereotype threat?

What are the consequences of stereotype threat?

What are the situations that lead to stereotype threat?

What can be done to reduce stereotype threat?

Stereotype threat refers to being at risk of confirming, as self-characteristic, a negative stereotype about one's group  (Steele & Aronson, 1995). This term was first used by Steele and Aronson (1995) who showed in several experiments that Black college freshmen and sophomores performed more poorly on standardized tests than White students when their race was emphasized. When race was not emphasized, however, Black students performed better and equivalently with White students. The results showed that performance in academic contexts can be harmed by the awareness that one's behavior might be viewed through the lens of racial stereotypes.

The advisor’s power to mitigate stereotype threat and support students.

Which of these strategies for mitigating stereotype threat resonates with you?

How might you incorporate use of this strategy in an advising appointment?

How Stereotype Threat Affects Us And What We Can Do

How Mindfulness Can Defeat Racial Bias

Whistling Vivaldi: How Stereotypes Affect Us and What We Can Do, Claude M. Steele